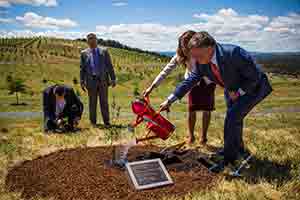 In line with the National Arboretum Canberra’s master plan, the site is home to a number of ceremonial trees planted by leaders, dignitaries and public figures from Australia and around the world.

A careful selection process and criteria has been established to determine which individuals are invited to partake in the ceremonies. For example ceremonial tree plantings are nominated by the Office of the Prime Minister or ACT Chief Minister and planted by a Head of State, Head of Government, Governors-General or Royalty, current or former Australian Prime Ministers and Australian Governor Generals.

The Arboretum's first ceremonial tree, a Yoshino cherry (Prunus x yedoensis), was planted by His Excellency Mr Takaaki Kojima, Ambassador of Japan on 27 July 2007 in Forest 17.

Currently there are approximately six ceremonial tree plantings each year, the majority of which are located in the Central Valley spine. As these trees grow, the Central Valley will become a shady walkway through a diverse range of trees, representing many people and places from around the world.

The Arboretum’s Australian Hero Tree dedication initiative publicly recognises professionals and individuals in Australia who have distinguished themselves in their field of endeavor, and significantly contributed to Australia’s society, knowledge wealth and lifestyle.

Australian heroes will be selected by ACT Government from a variety of professional fields, including but not limited to: science, literacy, arts, sports, education, entrepreneurs, charity, musicians and environment to represent Australia’s rich diversity.

For more information about the Avenue of tree dedication costs, timing and selection criteria please contact the National Arboretum directly.